People have begun using the word misokinesia to describe a sensory sensitivity to visual stimuli. Having misokinesia means that a person has negative emotional responses to seeing a particular movement or repetitive motion.

A recent request for examples of visual triggers produced many hundreds of responses from the Facebook misophonia support group members. Many of the examples involved issues with the face (especially chewing) or movements of fingers, hands, and legs. Some environmental triggers were also mentioned, such as windshield wipers, fans, and lights.

Visual triggers produce the same reactions from people as sound triggers do. They cause a person to experience negative emotions such as anger, disgust, frustration, rage, and more. Like misophonia, a person’s sensitivity fluctuates depending on unknown factors. These are possibly the same ones that affect misophonia: sleep, diet, exercise, environment, the visual source, etc. Visual triggers are not universal, and they are unique to the individual.

Unlike misophonia, one cannot lessen the impact of the trigger the way a person with misophonia can wear earplugs, headphones, etc. But the general avoidance techniques used for misophonia can be beneficial.

Articles and references that support visual triggers (misokinesia) as being part of misophonia:

Julie Ryan Evans, Alana Biggers, MD, June 27, 2017, https://www.healthline.com/health/misophonia,  Understanding Misophonia: What Is It? – “Some with misophonia also have visual triggers.”

What is Misokinesia?, Allergic to Sound, Feb 5, 2015, https://www.allergictosound.com/articles/misokinesia/ –  “(visual) triggers alongside their misophonia (sound) ones.” 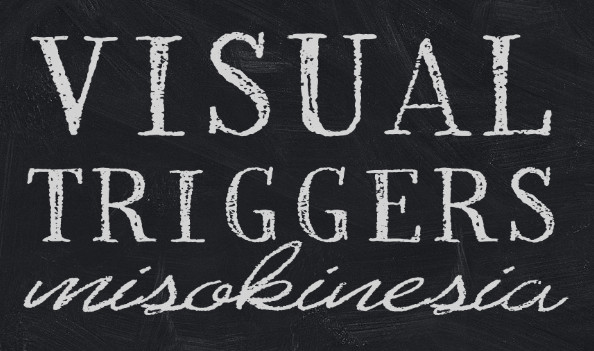